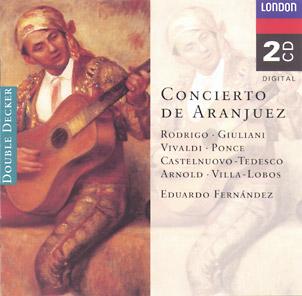 Eduardo Fernandez is the soloist in this all-digital programme presenting seven guitar concertos.

ABOUT THE ARTIST: Eduardo Fernandez began his study of the guitar at the age of seven with Raul Sanchez, a former pupil of Andres Segovia. Further studies included work with the composer Guido Santorsola in interpretation, harmony, counterpoint, and fugue. His study of the guitar continued with Abel Carlevaro, the famous Uruguayan guitarist.

Fernandez began to give concerts in 1963 as part of a duo team with his brother, but since 1971 he has pursued a career as a soloist. He won first prize in the Uruguayan Guitar Society Competition and in the International Competition of Porto Alegre, Brazil. In both competitions the judges were unanimous in their choice. In 1975 he was chosen as one of four finalists in the Radio France Competition in Paris, and in the same year he was a prizewinner in the Andres Segovia Competition in Palma de Mallorca, Spain.

In 1977 Fernandez gave a highly acclaimed performance at his United States debut in New York. Since that time he has maintained a very active concert career in both North and South America. He has also taught at several international guitar seminars, including those held in Sao Paulo and Buenos Aires.