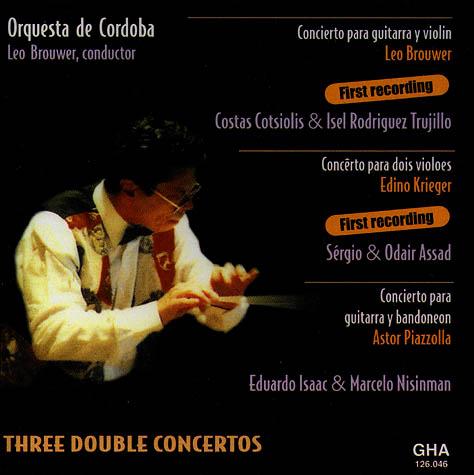 After the success of the first album recorded with the Orquesta de Cordoba and conducted by the Cuban composer Leo Brouwer, GHA Records is delighted to follow it up with this second recording of contemporary music for guitar and orchestra, this time with three concertos for two instruments, all composed between 1985 and 1995. As on the first album, there are several guitarists who partake in the three concertos and these soloists are rather well known amongst passionate guitar lovers.

On this recording, Greek guitarist Costas Cotsiolis presents us with the very first recording of the double concerto for guitar and violin "Omaggio a Paganini", which forms a new addition to the "The Complete Guitar Works of Leo Brouwer". Cotsiolis is accompanied by Cuban violinist Isel Rodriguez Trujillo. Educated at the Conservatorio Manuel Saumell in Havana, she received a scholarship to continue her studies at the State Conservatory of Leningrad. Isel Rodriguez Trujillo enjoyed lessons from teachers such as Alain Taran, I. Yuriev, A. Toledo and Aral Baisakalov. After having been first violinist for several years at the "Orquesta Nacional de Cuba", she presently is first violinist at the Orquesta de Cordoba and regulary performs in different ensembles for chamber music. "The concerto for violin and guitar called Omaggio a Paganini is made up of commonplace phrases, clichés and quotations. The observant listener will even notice the deliberate use of a series of elements which, although typical of violin and guitar technique, are not in the best of taste, but which are here employed — from time to time — almost in homage to kitsch. It is best to be prepared for irony and farce, or perhaps the opposite. Sometimes a quite predictable sequence will end with abrupt sounds, a sort of 'de-composition' or dissection of a cliché. The orchestra plays in a style reminiscent of Vivaldi, while the soloists carry out their exercises in the style of Paganini." - Leo Brouwer

The Brazilian brothers, Sérgio and Odair Assad, also present a first recording: a concerto for two guitars which was commissioned by GHA Records from Edino Krieger. "Like Ritmata which I wrote in 1974, my concerto for two guitars and strings — composed twenty years later — is a virtuosic work and extremely difficult for the two soloists. The work is dedicated to Sergio and Odair Assad, and was commissioned by the Belgian record company GHA. Throughout the concerto, I have tried to make the maximum use of the wide palette of guitar timbre. In the first movement — Toccata — it is the dynamic and rhythmic aspects of the soloists that take center stage, supported by the percussion, and incorporating not only elements of Afro-Brazilian rhythms but also some of the typical Brazilian bossa nova rhythms. In the second movement — Sonares — the accent is on the beauty of sound and the expressive capacities of the solo guitar. Modal scales and typical instrumental patterns, borrowed from popular music of the northeastern region of Brazil, are featured in this movement. They are treated within a contemplative context, in free time and as if improvised, punctuated by minimalist figures or clusters of string songs, thus creating a sort of sound journey suspended in space. In the final movement — Volatas — I have called on the extreme dextrous ability of the guitar which is able to perform passages of vertiginous velocity that none the less remain precise and clear. This is briefly interrupted by an intermediary section reminiscent once more of the northeast, over a baião motif, before the soloists embark on a cadenza. The vertiginous rhythms eventually take over, leading to the conclusion." - Edino Krieger

The Concierto para Guitarra y Bandoneon is one of the original works written for guitar during the 1980s by Astor Piazzolla. It was first performed in Liège, in Belgium, by Cacho Tirao and Astor Piazzolla in 1985. The concerto is built on a gradual crescendo which starts from a single note on the solo guitar and ends on a powerful chord uniting both soloists and orchestra. The solo guitar opens the free introduction before the bandoneon joins it in a nostalgic duo that lasts until the entry of the strings at the start of the second movement, a milonga in moderate tempo. The third movement is a heavily accented tango, shot through with the unique flavor and exceptional energy that emanates from Astor Piazzolla’s nuevo tango. For this recording, Eduardo Isaac enjoys the talented company of Argentinean bandoneonist Marcelo Nisinman. Educated by Abelardo Alfonsin, Marco Madrigal and Julio Pane for the bandoneon, Nisinman based his further development regarding harmony, counterpoint and composition on Guillermo Greatzer and Daniel Montes. He performs at the side of celebrities such as Libertad Lamarque, Atilio Stampone, Osvaldo Requena, Amelita Baltar and Gidon Kremer. He frequently accompanies Gary Burton on tours and, furthermore, he is a member of the Quinteto of Fernando Suarez Paz. The bandoneon of Marcelo Nisinman already made several world tours, during one of which he made a stop at Cordoba in July 1999 for a concert with his compatriot Eduardo Isaac and the recording that you find on this album.