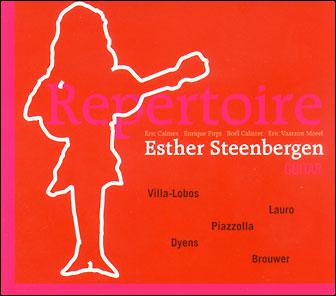 Repertoire by Esther Steenbergen and friends

This CD is the cheerful result of a fruitful collaboration between guitarist Esther Steenbergen and four musicians from the Latin American music scene. All the works on this cd are originally composed for the guitar and part of the standard repertoire. The guitar has always been important in folk music and many composers of classical guitar music have been inspired by this. Rhythm plays a vital role in folk music and most rhythms have names. This is a matter of course in South America, where most of the music on this CD originates. A number of these rhythms are to be heard here: joropo, habanera, tango, milonga, candombe and choriño. Some of the works are so often played that no-one dares to touch them any more for fear of lacking originality. Esther Steenbergen though, arranged the works for trio (guitar, bass & percussion), giving them new life and zest. With this cd she introduces her newly formed trio. Guitarist Esther Steenbergen is equally at home in classical, contemporary and Latin American music. She performs as a soloist with countless ensembles. With the Latin jazz musicians Eric Calmes and Enrique Firpi she formed her own trio, with whom she performs original guitar repertoire as well as pieces written for her and by her. A composer, arranger and bass player, Eric Calmes (Curaçao) is at home in jazz, fusion, salsa and classical music. His vitality, flexibility, adaptability and talent at putting down the bass line under whatever type of group have made him the favourite bass player for many musicians. Enrique Firpi (Uruguay) performs internationally and can be heard on countless CD’s. Eric Vaarzon Morel (The Netherlands) has always combined different musical styles with his own flamenco music and is much in demand. Roël Calister (Curaçao) is a young percussionist, always searching for musical enrichment and anything to do with percussion instruments. 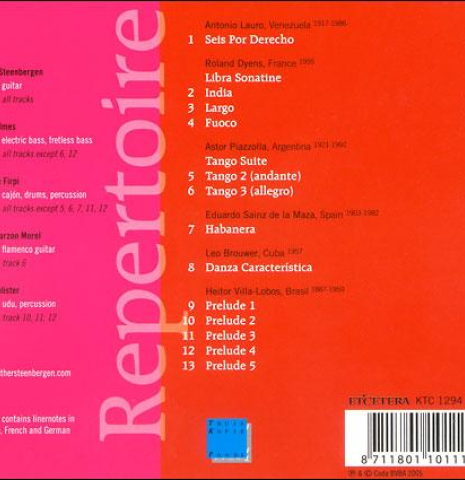 Background
Classical guitarist Esther Steenbergen is internationally renowned both as soloist and ensemble player and is recognized for her fresh approach to the repertoire. She works as a soloist, in ensembles and as an accompanist of singers and instrumentalists. Occasionally she takes part in theater productions. "The guitar has always played a vital role in folk music and many composers of classical guitar music have been inspired by this. Rhythm is perhaps the most important factor in folk music; I may well have always known this, but when I came to prepare this CD I consciously realised that most rhythms have names. This is a matter of course in South America, where most of the music on this CD originates. A number of these rhythms are to be heard here, including the joropo, the habanera, the tango, the milonga, the candombe and the choriño." - Esther Steenbergen

Repertoire by Esther Steenbergen and friends