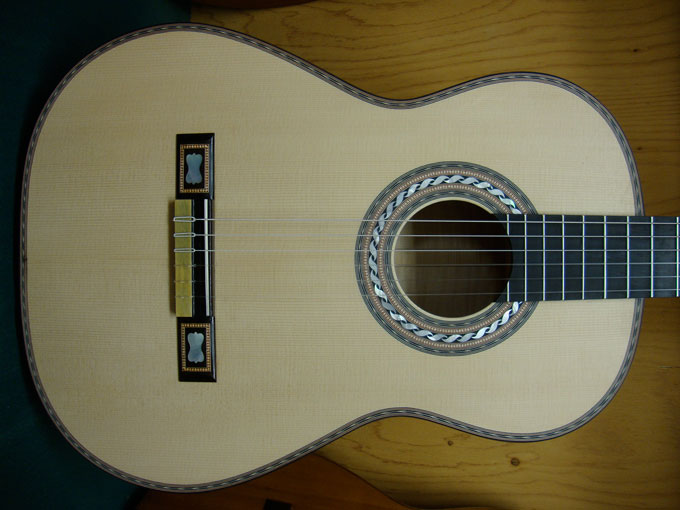 Gabriele Lodi on his upcoming “Contemporary Guitar” being built for GSI:

After many years of building guitars inspired by the great Spanish makers Antonio de Torres and Santos Hernandez I have decided to introduce my “Contemporary Model” guitar. This instrument is a tribute to the modern era of the guitar design, which began around the middle of the 20th century with the invention and introduction of “nylon” strings (replacing gut strings), which allowed for a new and more aggressive style of playing. This innovation gave players the extra needed strength of sound to be heard at acceptable volume levels in larger halls and theaters where the guitar had previously not been. My new guitar represents this “modern” style that was very distinct to its predecessors.

For this particular guitar I have chosen beautiful 35-year-old Italian spruce for the top and the best CSA rosewood possible for the back and sides. I particularly like the streak of light brown in the back that runs from the end block to the heel. I make my rosettes and purflings the old-fashioned way, using the same mosaic design for both. The center ring of the rosette is strongly inspired by Santos Hernandez’ famous design with a custom element that appeals to me – the design is smaller on the treble side than on the bass side (notice the “bandwidth” gradually increases as you follow the pattern clockwise), in accordance with the size of the frequencies of those strings! I always temporarily glue on the bridge and test all my guitars for sound before varnishing in order to make any adjustments necessary before applying finish. The scale is 650mm and tuners are Alessi.

Of course I consider Antonio De Torres to be the father of the modern classical guitar – He worked in the late romantic epoch with the most important composers and players of the time, such as Arcas, Tarrega, Cano and Llobet. The concept of a concert guitar at the time was very different from what it is today. Guitar concerts were held in small halls or in the apartments of wealthy patrons. Also, guitars at this time were strung with strings made of gut, a very different material from the nylon we use today. Gut is not very elastic and is susceptible to easy damage from nails. Players of gut strings have to be careful not to damage these very expensive gut strings, and so need to play with a lighter attack and short or no nails. At one time in history this was the normal way of playing and to us today represents a very different way of extracting sound from a guitar. As importantly, the instruments of this time were very lightly made and sensitive as well, matched as it were to the tension of the gut strings.

Around 1940, Andrés Segovia‘s growing prominence on the concert scene marked the emergence of a new way of playing – a sort of ‘revolution’ in how live guitar music was presented to the public. He brought the guitar from the smaller, intimate venues of the past into the bigger theaters and halls to a modern concert-going public. His efforts in this venture were greatly assisted by the invention of nylon guitar strings and modifications to guitar design. Nylon strings are very different in some important ways from gut. Nylon is very elastic and transmits energy to the top of the guitar in a different manner than gut. Since this changed the manner in which guitars effectively produced sound, guitar makers needed to make slight adjustments to their construction techniques to accommodate this change. These “nylon strings” guitars allowed players to “dig in” more than before and, in a new sense, extract more sound out of their guitars. They could play with a stronger attack and push the instrument harder than was previously possible, allowing for a wider dynamic range, more uniform balance across all registers and expressivity in their performances. In addition to the added strength and power of nylon strings, they were also less expensive and more durable. It is no coincidence that Segovia’s entry into the grand concert halls of the world coincided historically in tandem with the introduction of the nylon string and the design modifications that went into what we now call the “nylon-string” guitar.

The first builders in the new style were Hauser I and Bouchet. Quite simply, they both developed a more solid construction with greater mass and a more stable top with a transverse bar across the bridge, though each made the transverse bar differently from the other. In my opinion the relationship between Ida Presti and Robert Bouchet was one of the most fruitful collaborations between player and luthier in this early period. Guitar construction became more solid with a body resonance around F# or G and a bigger sound from the trebles. I believe that the modern guitar developed along with the rise of nylon strings, and that is why I make two types of guitar models – the Historical and the Contemporary.

Construction details of the “Contemporary” Model

When building my Contemporary guitar model, it is important that I keep in mind the particular details of the guitar’s historical development as my main reference. I use very traditional methods – all solid wood construction with hide glue and French polish. Nothing new here. I also try to consider the needs of todays concert players, and in particular the repertoire they will be performing – from renaissance to classical to contemporary genres. And of course, playability is very important as well. My bracing is a combination of the Spanish 5-fan brace with a transverse bar in the bridge position in line with the saddle to support the pressure of the strings. This is similar to Bouchet’s placement, but the shape and dimensions of the bar are quite different. The shape of my under-saddle bar was designed with the shape of the bridge in mind, my goal being to allow them to maximize elasticity in the central part of the top where the vibration of the top begins when a string is plucked. At the same time I leave a very stable area in the top’s lower bout, which is very important in the production of even and balanced trebles, with consistent sustain, and the avoidance of any dull notes. In my mind, my tops are braced to function similarly as to how an architect would design a bridge: very stable at the bases and elastic in the middle. 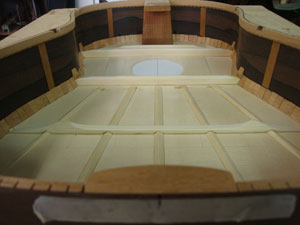 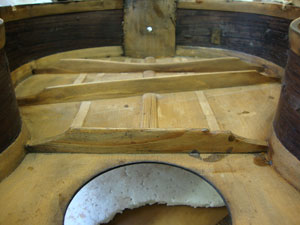 Another important builder who influenced my ideas about this was the important Parisian master of the early 19th century, René LaCote, who made one of his transverse bars in this manner and placed it under the bridge.

The final result of all this is to bring together these different influences and to integrate them into one instrument which I hope will allow the maximum amount of expression to whoever plays it. This blend of Spanish and French traditions (fan bracing mixed with the added transverse bar) should provide one instrument that will be able to accommodate any kind of music! Renaissance, Baroque and Romantic music were mostly played originally on instruments with transverse bars under the top, and for the music that followed in later periods, on fan strutted instruments.

Like all of us, I have my own preferred aesthetics in terms of a guitar’s look and sound. With this model I have tried to unify some of my experiences as both a luthier and a restorer to create my vision of perfect “modern yet traditional” guitar. I hope you like it! I would like to thank David Collett and everyone at GSI for giving me the freedom to build each guitar according to my inspiration! 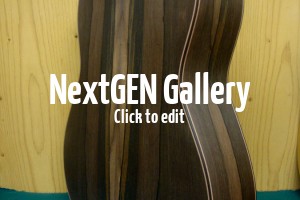 An interesting read. I have to say I am in love with the rosette design,