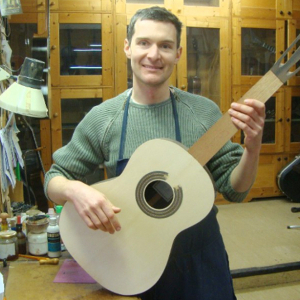 Gabriele Lodi was born in 1976, and his relationship with the guitar began very early, as his father was a luthier and player. During school, Gabriele would spend several afternoons a week in his father’s shop, where he would take lessons with his father and with many of the players who stopped by. The sound of the guitar moved him, but he never took his playing very seriously, and at 13 he began helping his father in the shop and spent any time away from school in the shop learning to make guitars. 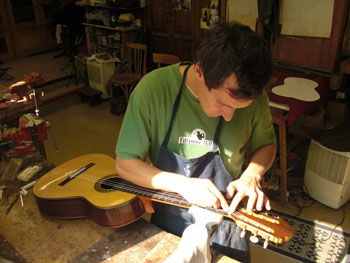 At the age of 20, after a year of military service, he began his career as a guitar maker.

He worked side by side with his father and became intrigued by the historical instruments that would come in to the shop for repair. He began to study and to search out instruments from the 19th century and to develop his knowledge of the music and instruments of the romantic period. He also came to the conclusion that the composers of the period were greatly influenced by the instruments they played: Giuliani with Fabbricatore and Stauffer, Legnani with Stauffer, Sor with Pages, Martinez, Panormo, Lacote. Aguado with Laprevotte and so on.

Gabriele came to the conclusion that with these instruments power, projection and sustain were often less important than expressiveness, quality of tone and dynamic range. 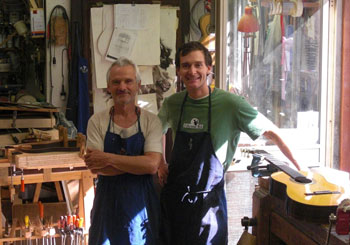 He decided to build very traditional guitars, and this approach led him to the Spanish school, from Torres on. Starting in 2004 he began to travel to Buenos Aires, where he had access to great Spanish guitars that he could study.

Today he restores many Spanish and romantic guitars, and he has had an amazing response to his own guitars from players. In fact, his workshop has become a meeting spot for players and collectors, and his restoration work increases with every year.

Lodi still works in his father’s workshop, and today he builds models based on the Madrid School (M. Ramírez, Santos and Esteso), and on the Barcelona School (Enrique Garcia).

SEE SOME OF Gabriele Lodi’S GUITARS