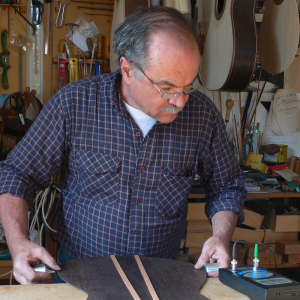 I use traditional guitar making techniques, but I won’t discard modern methods and materials if they help me achieve better results.

Italian luthier Paolo Coriani’s career began when he took on an apprenticeship at the Masetti workshop in Modena, between 1975 and 1980. In the initial years after setting out on his own, Coriani spent a good amount of time researching, performing, and building hurdy gurdys, as well as classical guitars influenced largely on Kohno and José Ramirez designs. He began making frequent trips to France after meeting and befriending Cristian Aubin, a concert guitarist and guitar maker who specialized in making copies of his 1867 Torres (interestingly, Aubin was also the guitar teacher of Daniel Friederich). Coming into contact with such a monumental instrument was a real pivotal moment of discovery for Coriani – the incredible depth of sonority that he encountered was to spark his interest in late 19th century Spanish instruments which provided the basis for a lifetime of research.

So with one foot firmly planted in the traditional Spanish school based on Torres, Coriani would in the mid to late 1980’s also explore other more modern styles, including developments in France with the innovative work of Daniel Friederich, and in the USA with Richard Schneider (in partnership with Dr. Michael Kasha). It was by discovering the work of these makers that Paolo became interested in a more scientific approach, using theories of the mechanics of vibration and the use of unconventional materials in the construction process. In 1993 he attended a course held by José Luis Romanillos on traditional Spanish classical guitar-making techniques and his interest once again shifted towards traditional Spanish methods, yet he managed to incorporate a slightly more “scientific” approach gleaned from more “modern” methods. From this point on his basic philosophy and building style has been a continual synthesis of these two powerful methods, although in the end, his guitars have remained very traditional in materials and style of build. In 2002 he built his first copy of a Manuel Ramírez guitar dating from 1890. Since then he has studied other instruments including Hermann Hauser I and Antonio de Torres. He also builds a Torres model, based on an 1864 instrument (FE19 also known as “La Suprema”) which features the use of a tornavoz. 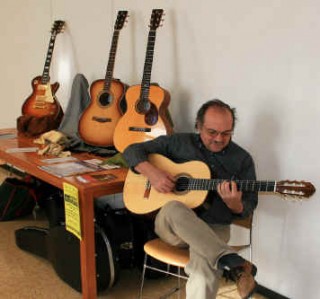 Paolo has won numerous awards for his instruments including 3rd prize in the Bagnacavallo Young Luthiers Competition in 1984 for a hurdy gurdy, 1st prize for a classical guitar at the Bagnacavallo National Competition in 1986, as well as 1st prize and the “Baveno” award at the 1st International Classical Guitar Making Competition in Baveno in 1993. Since 1986 he has been regularly invited to give lectures in specialized schools and at classical guitar seminars on guitar making techniques and historical instruments. He has also served on guitar competition juries, taken on apprentices, so in addition to his work as a guitar maker, he is also a very active participant in the larger guitar community.

SEE SOME OF Paolo Coriani’S GUITARS