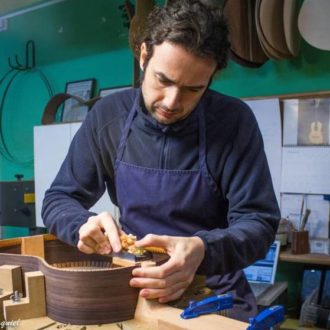 Carlos Juan Busquiel was born in 1980 and started playing the guitar at age 12, although his formal music studies at conservatory were done on the violin. His interest on lutherie began when, self-taught, he embarked on the construction of an electric violin for personal use. It was a very simple instrument, but it helped him to enter the world of violin making. The next step was the construction of an acoustic violin, based on the “Kruse” of Stradivari. It was at this time that he had the good fortune to meet luthier Rafael López Porras, who formally introduced him in to art of guitar making. Rafael was his first teacher and impressed upon Carlos the passion for building guitars in the Spanish method. From that moment on, Carlos became committed exclusively to building guitars. He completed his training with none other than the great José Luis Romanillos in a course on the construction of a hand vihuela directed by Jaume Bosser and assisted by Joan Pellisa. Meeting Romanillos and listening to his advice was a decisive step for Carlos in developing his concept of the Spanish guitar, knowing its traditional construction features, based on the designs of Antonio de Torres. Later, José Luis Romanillos also gave advise to Carlos during the construction of a Torres replica. Carlos has had the good fortune to evaluate many different other master guitars from the likes of Vicente Arias, José and Manuel Ramírez, Santos Hernández, Enrique García, Francisco Simplicio and others, which has also been decisive in the development of his personal style. Carlos works in Petrer, a town located in Alicante, in the Spanish east, where he lives with his wife and two children.