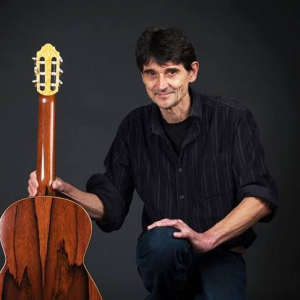 Otto Rauch was born in the city of Mainz, Germany, in 1954 and began studying the classical guitar at the age of 9. Though he later trained to sell insurance and studied business management, by 1977 he was working as a rock guitarist and singer, and in 1977 he got the idea to build a copy of the guitar he was playing at the time – a John Birch electric (Birch is known for making guitars for Queen guitarist Brian May). Thus began his career as a luthier. 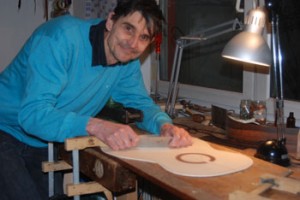 By 1979 Rauch was living in Ibiza, Spain, and in an old farmhouse he found an old Ramirez classical. He proceeded to make a plan of that Ramirez and by 1980 he was making classical guitars. 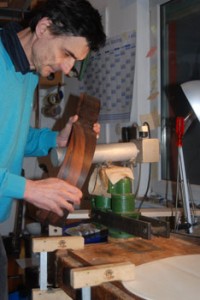 In the late ‘90s Otto started working on a model based on a 1930 Hauser I, and in particular he noticed the importance of the angle and thickness of the bridge on the sound of the guitar. Around this time Otto also helped a friend work on string instruments and bows for the Mainz Symphony Orchestra and before he knew it he was also making violins.

In addition to his own model, Otto makes guitars based on that 1930 Hauser, an 1885 Torres, a Humphrey model and guitars by Stauffer, Schmid and Stradivari, and his guitars are played by Stefan Hladek, Benjamin Scheck, three of the four members of the Barrios Guitar Quartet and many more great players.

In addition to making guitars Otto continues to play them and to compose music for guitar, and he has just completed his ‘Suite Christophoro Colombo’. As if this weren’t enough, in his spare time he is building a Stradivari cello and various Fender electric guitars!