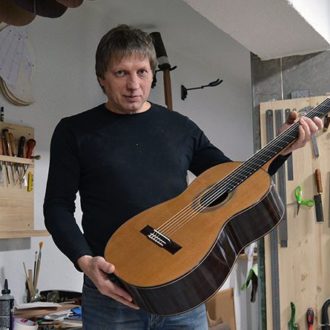 The guitar must have a wide dynamic spectrum, a quick attack, a well-balanced sound, a beautiful tone quality.

We are very thrilled to announce that we’ll soon be receiving our first guitar from Russian-born/Granada-based luthier Pavel Gavryushov. His first guitar built for us will be available at the GSI Store very soon where you can view all its photos and details. For now, check out the photos of his recent work below as well as photos and videos of classical guitarists Aniello Desiderio, Roland Dyens, Zoran Dukic and Dmitry Nilov playing his instruments.

GSI President David Collett met Pavel many years ago in Moscow when Pavel was apprenticing under Timophey Tkach. Since then, David has met with him in Granada, Spain a couple of times after he moved there, but it was when Andy Lee and David were in Frankfurt this last April that they finally saw a guitar of Pavel’s they thought was really spectacular. So we immediately ordered one! The Russian guitar-maker is rooted deeply in the Spanish tradition of construction methods of the classical guitar (as established by Antonio de Torres and further developed by other masters in the 20th century). An important driving force for Pavel’s creations is found in his belief that:

“A guitar is a complex acoustic construction. It must have a wide dynamic spectrum, a quick attack, a well-balanced sound, a beautiful tone quality. In order to create such an instrument the master needs to possess knowledge that goes beyond woodwork ability. One needs to know the laws of physics, acoustics and the bases of guitar construction. No amount of enthusiasm, obsession, impulse, energy or imagination would allow anyone to make a proper instrument without corresponding knowledge.” (Read his entire philosophy here).

We like what we hear from this exciting new luthier, and it’s great to see that he approaches his craft with a scientific mind, much like a Greg Smallman or Simon Marty, but with a traditional Spanish technique like that of Antonio de Torres. Pavel Gavryushov’s works will be a great addition to the showroom!

See some of PAVEL GAVRYUSHOV’s guitars