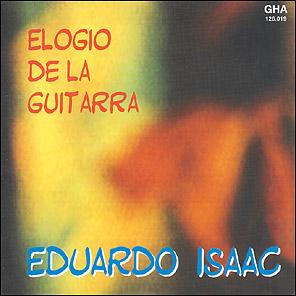 An all-20th Century program with works by Castelnuovo-Tedesco, Rodrigo, Assad and Lester.

ABOUT THE ARTIST: A series of seminars in Argentina and Brazil were guitarist Eduardo Isaac`s first introduction to the various directions within the world of the Latin American guitar. In record time he won first prize at several renowned guitar contests in South America; in Porto Alegre, Rio de Janeiro, Vina del Mar and Caracas. His next move was the conquest of Europe, where he brilliantly came first not only at the contest "Infanta Cristina" in Madrid, but subsequently also at the Andres Segovia contest in Palma de Mallorca and, more recently, at the contest "Le Printemps de la Guitare" in Belgium (under royal patronage of Queen Mother Fabiola). In all, between 1984 and 1988, Isaac won 8 major international guitar competitions. Many famous orchestras have since then invited Eduardo Isaac to play with them: not only in his homeland of Argentina, but also with orchestras in countries such as Japan, Chili, Portugal, Korea, Belgium, France, Spain and the United States. Amongst his own favorite concertos are the "Concierto del Sur" by Manuel Maria Ponce, the "Concierto para Guitarra y Bandoneon" by Astor Piazzolla and the "Concierto d`Aranjuez" and "Fantasia para un Gentilhombre" by Joaquin Rodrigo. With great enthusiasm Eduardo Isaac participates in the organization of musical group tours in Buenos Aires and Mar del Plata, where he initiates the participants into the rich world of the guitar. Eduardo Isaac is also a professor at the Conservatory of Entre Rios and often he is asked to give seminars in France, Belgium, Spain, Canada, the United States and Portugal. Contemporary guitar music is of great importance to Eduardo Isaac, which is not only reflected in his concerts, but also in the many recordings he has made with GHA over the years. Eduardo Isaac plays on a guitar made in 1991 by the famous Parisian luthier, Dominique Field. 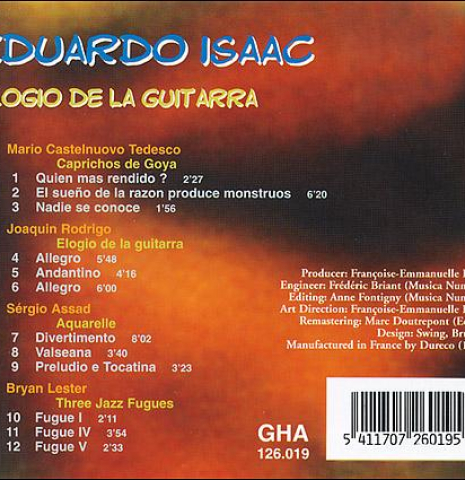